Our last month in Florence begins….

Saturday was a very exciting day for Parkrun Firenze as they were celebrating their first birthday.  Excited to be part of this, we headed off to the park on our mobikes, about ½ hour cycle / 7.5km away.  As Autumn has set in now, we needed an extra layer of clothing to keep us warm as we pedaled casually over the cobblestones and along the river.  Walter was very happy to make it through the run without aggravating his injury (and did a very respectable time) and Glenda equalled her PB for the course (to the second), so that went well.

Unfortunately, we left the scene before the cake was cut and the prosecco was opened.  They decided to wait until the last person was finished before doing so, and by some strange twist of fate, this week had the slowest people we’ve had at any Florence Parkrun we’ve been too.  It was a bit too cold to hang around.  Sadly, a number of the local runners left before the celebrations, including the regular first female.

On Sunday, after a leisurely breakfast, we walked out of the bar at Santa Croce only to be met by the runners taking part in the Corri la Vita.

This is an annual event to raise money for the fight against breast cancer.  We had thought of taking part but with our trip to Austria, had left it too late to enter.  It was a good thing as after that, we arrived at church only to discover that the sound system was causing issues and that the person that was rostered on for the morning was sick.  Walter threw himself in the deep end and offered to help.  A very basic system made it harder to identify the cause of the problem – fortunately turning off the key board stopped the noise!

Whilst our normal food market is closed on Sundays, there is a general market in the same area.  Much busier than during the week and some interesting items on display.  Hard to imagine where some of them have come from and if they ever get sold!

After enjoying a balmy evening on Sunday, going for a walk alongside the river and relaxing over a glass off wine at a small piazza, the weather seemed to realise September was over.  October has definitely brought a step change in the conditions, starting with a couple of wet, cold days.  Whilst after that, the sun has been out again, and the middle of the days are warm, the wind has been blowing almost constantly.  What has been even more strange for us is that rather than dying down at night, it seems to get stronger, howling at times.  It has given us a new appreciation for what the people in Ottawa went through last week – cannot begin to imagine the noise that went with the tornadoes!

The Florentines obviously expect a change in October as all the “Summer” activities shut down at the end of September.  Late night closures (10pm) at museums and galleries are a thing of the past.  The beach bars and other pop up restaurants along the river have all been cleared away or are in the process of being taken down.  Even the photo display of the dragon boat festival has been taken down – unfortunately before we had a chance to see it properly as opposed to a passing glance as we ran by.  It has been interesting to see everyone suddenly revert to their winter wardrobes overnight.  It also seems that the coffee shops are now busier in the mornings – they either need more coffee in the colder weather or stay longer to keep warm.  Florence is famous for some great hot chocolate.  We still need to try some – soon!

Still some things to see….

With our annual pass to the Uffizi and Palazzo Pitti, we’ve been enjoying breaking our visits into small chunks, not having to do everything at once.  This meant we hadn’t yet been to the Costume Gallery at Palazzo Pitti, which was housing a special exhibition of garments and accessories called Traces 2018. Letting fashion drive you.  It combines modern sculptures and painting alongside fashions items in a series of juxtapositions, some of them natural and logical, some of them shocking and conflicting.  Many of the garments were from the 1980s – 1990s, so very recognisable.

Whilst we still feel guilty going to the front of the long queues to get our tickets, it sure does make visits like this more enjoyable.

Wondering around the streets we have noticed the beautiful lampposts around the city – the cast iron lampposts stood on three ornate, cabriole claw feet. The leg muscles and shape of the paw indicated a big cat.  We had to find out some more.

In the Republic of Florence the lion was the most important symbol of political power and independence. An animal that could annihilate both the wolf of Sienna and the eagle of Pisa.  Up until 1771, the Republic of Florence even kept a menagerie of live lions in Via dei Leoni behind Palazzo Vecchio. One of these lions allegedly broke out of the cage and took off with a baby boy, but the baby was later returned to the mother unscathed. The story illustrates how the lion protects the citizens of Florence, and for this reason lion sculptures and imagery can be found all over the city on pedestals, gates and doorways.  Oonce you start looking for lions, you’ll realise that they are everywhere in Florence. 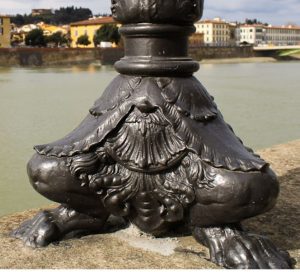 Piazza della Libertà is the northernmost point of the historic centre of Florence.  It was created in the 19th century during works to produce the Viali di Circonvallazione around the city – the ring road that runs between our apartment and the historical centre.  In 1738 the square’s Triumphal Arch of the Lorraine was erected to celebrate the arrival of the Habsburg-Lorraine dynasty in Florence.  In 1865, the demolition of the medieval walls allowed for a  reshaping of the area and by 1875 it took on the present elliptical shape “square”, surrounded by palaces. In the middle of the tree-lined park is a pool with fountains in front of the triumphal arch.  In winter, it is transformed into an ice rink. 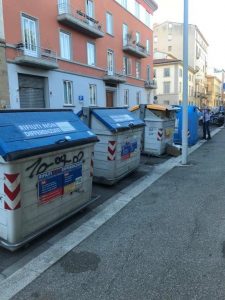 Our garbage can and must be recycled – it is separated into four main groups: paper, plastics, organics and general waste.  Once you’re done with the diligent work of separating the garbage, it is time to dump it somewhere.  In every main street or square there are large containers more or less the size of a car and in different colours: blue, yellow, brown and another one is a blue colour but in the shape of a bell!  Yellow containers are for paper, blue box shaped containers are for general garbage, brown containers for organics and blue bell-shaped containers are for plastics and glass.  Even though recycling is mandatory and significant fines apply, people still dump bottles in the general waste bins.  Walter gets impatient with people that refuse to put something in properly, blocking the access hole when there’s plenty of space in the bin!