Filled with envy in Valencia….

On arrival in Valencia, we discovered that there was a half marathon running though the city that day – we were extremely sad that we couldn’t get to participate as we’d found out too late.  We were even more upset, and filled with envy, as we watched the competitors being given an amazing level of support by spectators and volunteers at the water tables.  The final straw came when we realised that the start and end of the race was near the port where the Azamara Quest was docked.

That said, we were happy just to be part of the atmosphere.  When we arrived back at the ship for lunch, one of the other couples on board was expressing their disappointment at the city and yet another, how it was too busy and they were worried about losing each other.  Whereas for us it was the perfect day out.  Lapping up the atmosphere as the locals took part in one of their community events. 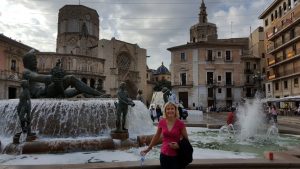 Being Sunday, there seemed to be a lot of other entertainment taking place, including an open air market selling all things “non touristy” – that was how a tour guide passing by described it to his group – and some Spanish country dancing.  As was now to be expected, the history, good cheap food and amazing architecture continued.

The day ended with a 10km run along the beachfront to make up for missing out on competing in the half marathon. 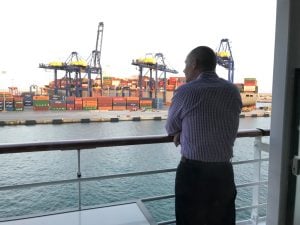 After a shower and watching the sail away from our balcony, we were ready for dinner and a night out.