Home of the rich and famous…..and the infamous…..

We were both feeling a little under the weather – all this travelling had taken its toll and we had both picked up lurgies.  As a result, we decided that we’d have a low key day in Palma de Majorca, capital of the Balearic Islands (and previously home to the now late Christopher Skase, one of Australia’s most well-known businessmen and wanted fugitive).

Until stepping off the ship, low key meant a leisurely stroll along the marina near where we were docked, possibly making it as far as the historic centre and the famous cathedral, commonly known as La Seu.  The interpretation of what we regarded as easy changed the minute we walked out of the port authority door and saw the mobile bike hire place.  25 Euro for two bikes for the day (and no helmets required) was too good to refuse, so off we went to explore the island. 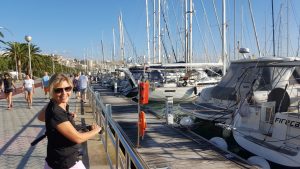 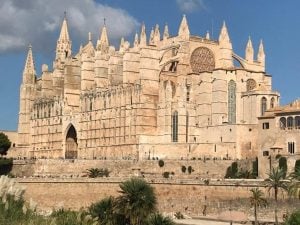 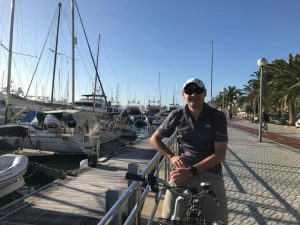 It was interesting to see how much the landscape changed as we navigated the 20+km along the coastline.  From enormous yachts and motor launches, past expansive green lawns to the ancient Gothic Roman Cathedral….and that was in the first 5km.  We traversed the relatively rugged terrain near the airport, where seemingly hundreds of planes flew overhead so closely that we felt we could touch them.  Expat homes lined the foreshore, with Brits sitting on their patios summing themselves on a balmy October day.  Luxury homes were evident alongside historical houses.  The famous long stretch of sand on the east of Palma, namely Playa de Palma, was popular with people lying on the beach, cycling, skateboarding and walking.  For us, it was bit tacky and we were happy to leave the gaudy restaurants and tourist shops and make our way back to the ship for a welcome lunch. 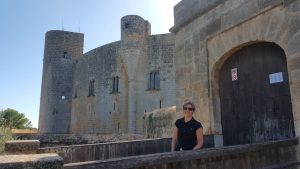 After lunch, in our wisdom, we decided to head up the hill behind the town to the Bellver Castle, one of the few circular castles in Europe, boasting magnificent views over the town and out to the turquoise waters beyond.  Unfortunately, getting those views meant one thing – we had to go UP!  And the gears on our rented bikes were certainly not made for climbing.  Whilst we resorted to wheeling them up the hill at least we knew we’d be able to head back down quickly – and this we did, sailing down with the wind in our hair (Glenda’s anyway). 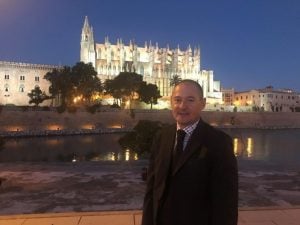 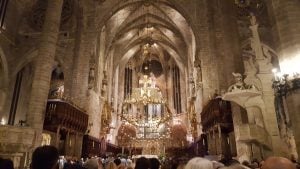 Azamara prides itself on presenting its guests with a unique experience at one of its ports during the cruise.  And this time, it was a concert at Le Seu, something that had never been put on for cruise ship passengers before.  After getting dressed up and an early dinner, we all climbed on to buses and headed off to the magnificent building.  It turned out to be a fabulous opportunity to see the inside of this enormous, breathtaking structure.  Unfortunately, the huge space made it difficult for the pipe organ and choir to make as big a musical impact.  The artistic highlight of the night was the painting by Eric Waugh, the ship’s resident artist – completed within the half hour performance. 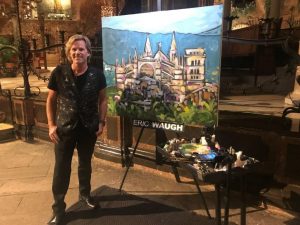 The final event of the day was a ridiculously decadent chocolate buffet laid out in the main dining room on the ship.  Didn’t know that there were so many things that could be made from chocolate.  Yum!!