Our drive along the first 100km of the Icefield Parkway, the highway linking Jasper and Lake Louise, more than lived up to expectations.  The ranges of snow-capped mountains, turquoise waterways and green trees lining the road is a feast for the eyes.  Almost too much to take in!!  Add to that the detours to visit the thundering waterfalls and pine forests, we were full of wonder even before we arrived at our primary destination for the day – the Athabasca Glacier, a small part of the Colombian Icefields.

Following one or two scenic stops, our first visit was to the Athabasca Waterfall, on the Athabasca River that runs past our cabin.  The falls serve to link the glacial waters with the salty Arctic ocean.  Unfortunately, we were confronted with a number of memorials to people that had lost their lives, slipping off rocks into the furious torrents of water.  Sadly, people still cannot help moving off the marked paths to get that little bit closer or to take a selfie.

After marvelling at the Sunwapta Falls, we decided to head a bit off the beaten track, brave the bears and walk the extra 2 kms to the lower falls – and boy was it worthwhile.  Besides being the only people there, there was so much to see – not only one waterfall, but we could wonder along the river watching each cascade as it moved lower and flowed more gently with each drop in altitude.  And all without bumping into a grizzly!

Speaking of grizzlies, this was also our day to have the privilege of seeing our first one (having seen a number of black bears).  We had just pased a Canadian Traffic Jam – bunch of cars and RVs stopped all over the road looking at an animal or bird – when Walter spotted a bear ahead of us on the other side of the road, looking to cross.  Having slowed down and with hazards on, we were flabbergasted as a car tore past us almost taking out a bear!  Fortunately the bear was smarter than the driver of the car and had hesitated before making its way on to the road – so a major disaster was avoided.  Then the exciting bit – the bear crossed the road behind us and started walking along the side of road, metres from our car window.  In her eagerness, Glenda struggled with her phone but eventually managed to get a reasonable photo.

We’d already had enough excitement for the day, and we still had the main activity to go – a walk across the Athabasca Glacier, navigating (and avoiding) crevasses.  Jessica, our guide, was extremely knowledgeable about all things glacial.  This was only her second season in Canada, but as a Kiwi, had worked at Fox Glacier.  In addition to being clued-up, she was loads of fun, so we thoroughly enjoyed the three hour journey with her and another nine people – being educated, laughing and taking lots of photos.

After being kitted out with crampons to put on the bottom of our boots to avoid slipping on the ice, we started the climb towards the glacier.  We were able to see how much it has receded over the years – the 1982 mark was a very long way from the start of the ice.  Once we reached the ice, we put on the crampons and marched on. 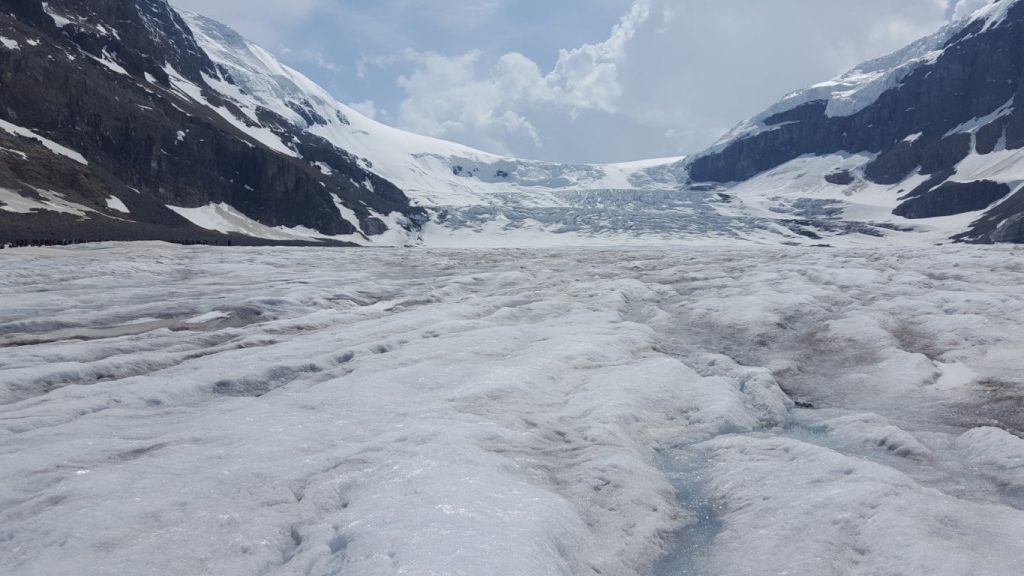 It’s hard to describe the experience, suffice to say that it will be something we’ll remember for a long time.  The only downside was the icy wind that blew off the ice – and we were told that this was a warm day, probably the hottest of the season so far!

Other than the stoppage for roadworks, the homeward journey was pretty uneventful.  But we were happy to get home for a shower and venture out for dinner.  An after dinner stroll around Jasper was a nice way to end the day – at 9pm the sun was still high in the sky given the post 10pm sunset