After our final breakfast on board, we sat in the ship’s café having coffee as we were early for the transfer that we had arranged to our accommodation.  Disembarkation and finding our luggage was quick and in no time we were on our way to central Rome.

Fortunately, we had organised our transfer through the accommodation as the driver knew where to go.  On arrival, he pointed us to the large wooden doors and pressed the buzzer to make sure someone was around.  We were a little confused, as based on what we’d seen when we booked, we’d expected a more obvious entrance.  Whilst Walter remained downstairs with the luggage, Glenda walked up flights of marble stairs until eventually someone’s head popped out of a doorway – it was Gianluca, the friendly owner.  It turned out that we were staying in an old family home – the family still live on some of the floors and the rest are rented out as boutique accommodation.

Our room was HUGE (good thing given all the bags we had) and had an amazing view onto the ruins of the Roman Forum and Capitoline Hill.  Even better was the view from the terrace – across the city and up to the Colosseum.  We were glad to avail ourselves of the little lift – although it did require a few trips up to fit everything in. 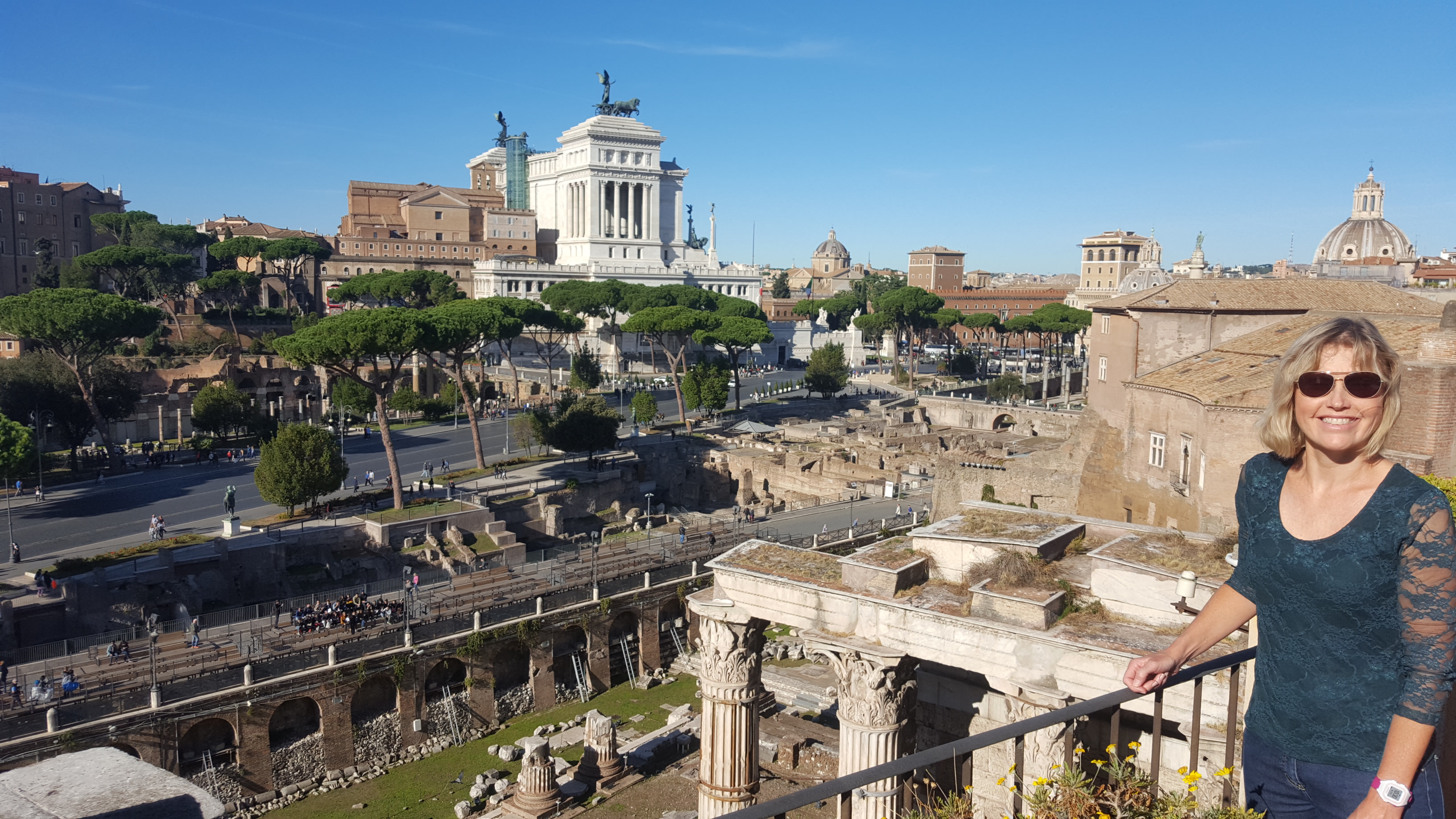 After settling in, we ventured to the rooftop terrace to see Gianluca, and he gave us a suggested walking itinerary for the rest of the day.  He was concerned at the brevity of our stay – we assured him we had been before and would be back. 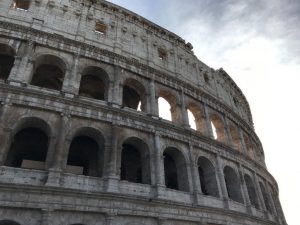 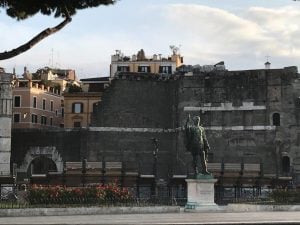 It was sooo good to be wondering the streets of Rome again – although we were stunned at how much busier it was since our last visit in 2011.  We visited the Piazza Del Popolo which had been under restoration previously.  It was a lot bigger than we had realised.  We also braved the crowds to peak at the Trevi fountain which had been restored since we were last there.  The Spanish Steps and Pantheon completed our reminiscing before we headed back to the hotel to decide where to go for a late lunch. 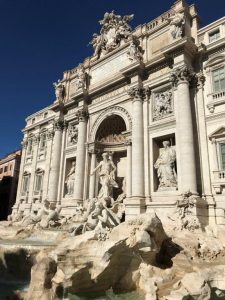 Sadly, our pizza lunch at a local pizzeria around the corner from home didn’t go according to plan when Walter succumbed to a migraine.  So the rest of the afternoon was spent with him on the bed whilst Glenda explored the local area and took a wonder around the Colosseum.  Fortunately, he recovered sufficiently for us to head out again for a passeggiata – the Italian evening stroll around the streets.  This allowed us to savour our final macchiato (even in the middle of Rome it was 90c – less than $1.50) and binge on a gelato from our favourite gelataria. 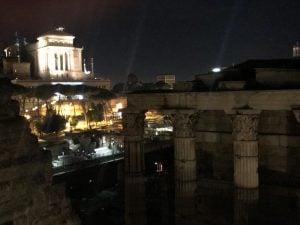 A night time walk up to Capitoline Hill to see the lights over the Roman Forum was a great way to end our somewhat strange day in Rome.  That is before going back to the accommodation and sitting in the lovely communal kitchen / dining area to eat leftover pizza from lunch and sip on peppermint tea (thanks to Tracey). 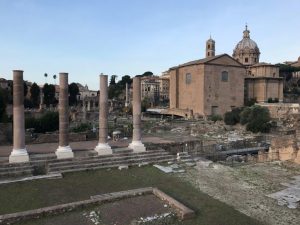 The next morning, we woke up early and given the proximity, we were able to take another stroll around the Roman Forum before breakfast.  It was sooo much better this time – early on Sunday morning with only a few runners about and no other tourists!

Breakfast was held in another part of the house and consisted of standard Italian buffet fare – brioche, sweet cakes, fruit, bread and cheese.  And naturally, a macchiato or two!

As we waited for our driver to arrive to take us to the airport, Gianluca told us that clocks had changed the night before.  We’d been in a bubble – away from TV, radio and newspaper – so had not idea.  Panic!!  What time was it?  Would we make our flight?

We soon forgot about our concern – for a while anyway – with our driver being one of the most passionate historians / tour guides we’ve ever had.  We found out more in the 30 minutes trip to the airport than in days of touring.  But then we were back to reality!  On checking in, being 20kg overweight (not us, our luggage), they wanted to charge us USD1000!  With assistance from ground staff, we purchased a hand luggage bag in which to offload some of the excess.  We also offloaded some nice, but heavy books to said ground staff to get us to the level we needed to avoid the $$