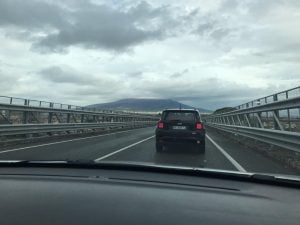 We had a somewhat eventful trip to Orvieto!  Not only did we have to navigate the narrow, windy roads of the Amalfi Coast, but the heavens opened about 15 minutes into our trip as we approached Sorrento.  And I mean torrential rain!!  There were torrents of water flowing down the road!  They need rain – it’s been so dry throughout the country – but why now??  No sooner had we survived the downpour than the road bypassing Naples became a parking lot.  One consolation, there was plenty of time to study Vesuvius blanketed in mist.

Before the rain came down…

and then rain came down:( 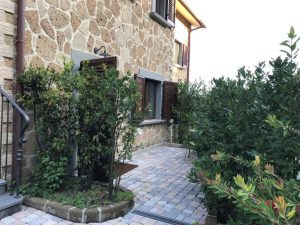 We had decided to stay at Altarocca wine resort, a working wine estate about 8km out of Orvieto rather than in the hilltop town.  This gave us free parking and a break from the bustle of the city, particularly after the craziness of the Amalfi Coast. 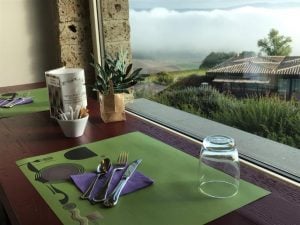 It was a typical large international resort with standard food at their breakfast buffet (lots of smoked salmon!!) and furnishings in the rooms were more French provincial than Italian.  What was really unique was that instead of room numbers, we had names – all wine related – and we were in Decanter.  The rooms were large and very comfortable and we did enjoy spreading ourselves out.  The afternoon of our arrival, we had a fun time chatting to the person behind the car that made us our macchiato – she was originally from Moldova, an Eastern European country and former Soviet republic, so we had some laughs as we communicated in a mix of English and Italian.  The evening was spent over a quiet dinner enjoying the wines made onsite. 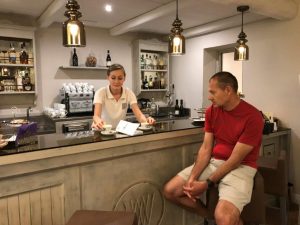 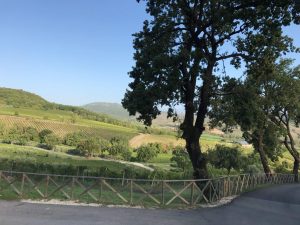 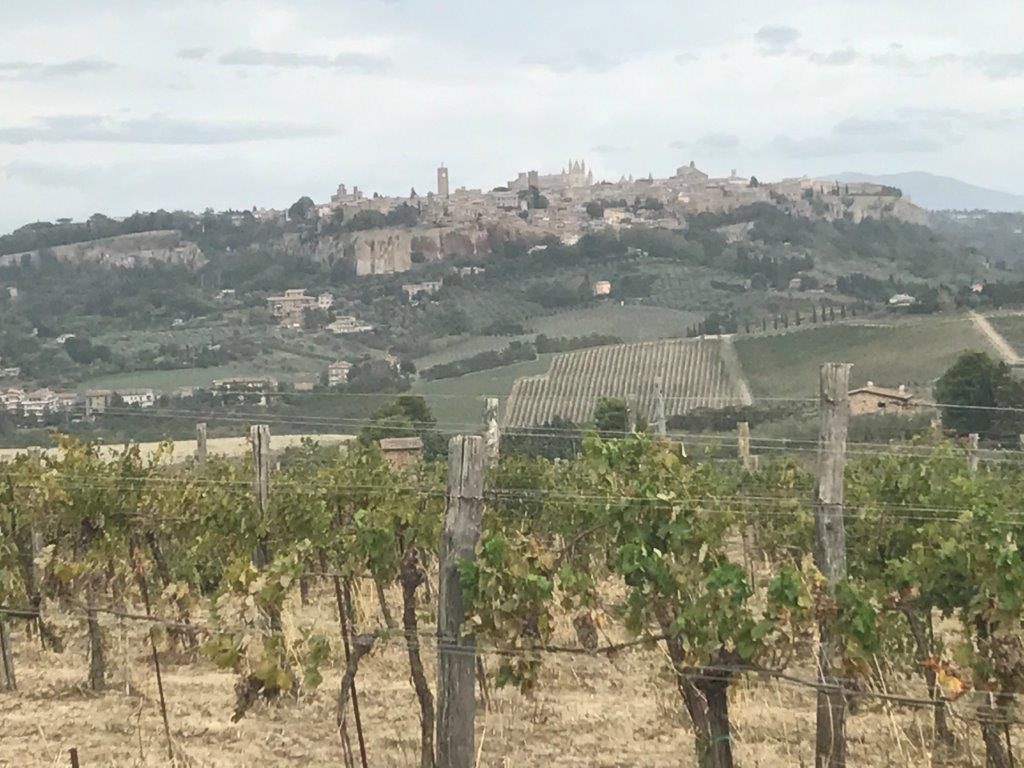 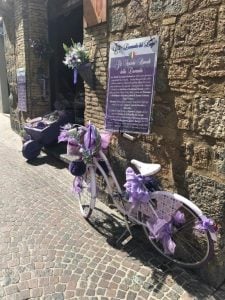 Orvieto is a city in southwestern Umbria, approximately halfway between Rome (Lazio) and Florence (Tuscany).  It is situated on the flat summit of a large butte of volcanic tuff, rising dramatically above the almost-vertical faces of tuff cliffs that are completed by defensive walls built of the same stone called Tufa.  Orvieto was colonised nine centuries BC and flourished during the Etruscan period.  The Romans virtually destroyed it after taking it over in 264BC, being revived again during medieval times.  Recent Estruscan finds and a trove of medieval and Renaissance art have increased its attraction as a destination.  That said, we found it to still be very much a place where people live – although there were the obligatory tourist shops selling fridge magnets and the products of the area – Orvieto Classico wine and lavender – there were plenty of supermarkets, butchers, pharmacies and shoe repair shops.  And lots of hairdressers / barbers!  And we observed more locals greeting each other with a “Ciao” or “Buongiorno” rather than tourists with maps and cameras.  We enjoyed wandering along the backstreets. 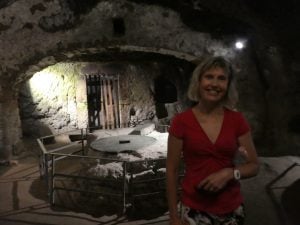 There is more to Orvieto than the amazing structure sitting on top of the hill.  In the late seventies, when a great landslide made a huge hole into Orvieto’s structure, art and history lovers were concerned about the survival of Orvieto and its works of art.  Scientists were interested in what lay behind the instability.  The exploration of the latter led to the discovery of an incredible underground world that had been dug, used and then forgotten: a dark labyrinth subdivided into over 1200 grottoes, tunnels, wells and reservoirs, created by man, blow after blow with a pickaxe, in almost three millenniums of persistent and continuous work.  We did a tour through a few of the underground tunnels where we could see where people had carried out their business such as making wine and olive oil.  There were also walls with hundreds of holes where businessman had bred pigeons. 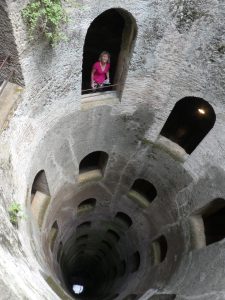 There are also two underground well systems that are open to visitors.  We went deep down into the Pozzo di San Patrizio – St Patrick’s Well.  It was built between 1527 and 1537, at the behest of Pope Clement VII who had taken refuge at Orvieto during the sack of Rome in 1527 by the Holy Roman Emperor Charles V.  He feared that the city’s water supply would be insufficient in the event of a siege. The well was completed in 1537 during the papacy of Pope Paul III.  The central well shaft is surrounded by two spiral ramps in a double helix, accessed by two doors, which allowed mules to carry empty and full water vessels separately in downward and upward directions without obstruction. The cylindrical well is 53.15 metres deep with a base diameter of 13 metres. There are 248 steps and 70 windows provide light. 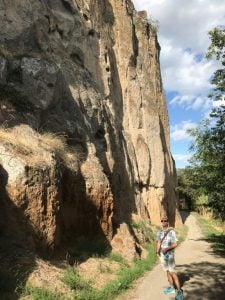 Following our wanders around the city, both on top and underground, we treated ourselves to a hearty lunch.  We then walked it off by taking to the trail surrounding the gigantic walls – although we didn’t quite complete the entire loop as our parking was due to expire and we didn’t want to risk a fine.