In and around Praiano….

We decided to take the direct route from Matera to the coast, driving along the main autostrada.  This made for a quick, uneventful trip until we hit the Amalfi Coast at Salerno.  For those that have driven the Amalfi Coast, you’ll know what this means, those that haven’t can only imagine!  The enormous cliffs falling into azure waters below making for stunning views.  It also means the road is narrow, built into said cliffs and full of lots and lots (and more lots) of cars and motorcycles.  It was good to get as far as Maiori, a small town along the coast with a flat waterfront, and have a break for lunch.  We discovered a little waterside restaurant where the owner sat down at our table and went through the day’s food on a piece of paper.  The fresh pasta and fish that we ended up with was awesome and gave us substance for the onward trip. 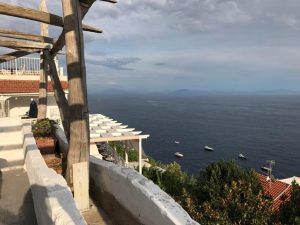 Praiano, our town of residence for the next three nights, is situated on the Amalfi Coast (Costiera Amalfitana), a prime tourist location for the region and Italy alike, between the towns of Amalfi and Positano.  We stayed there during one of our previous trips to Italy, so were keen to return and revive old memories.  This we did, although it was MUCH busier than when last we were there. 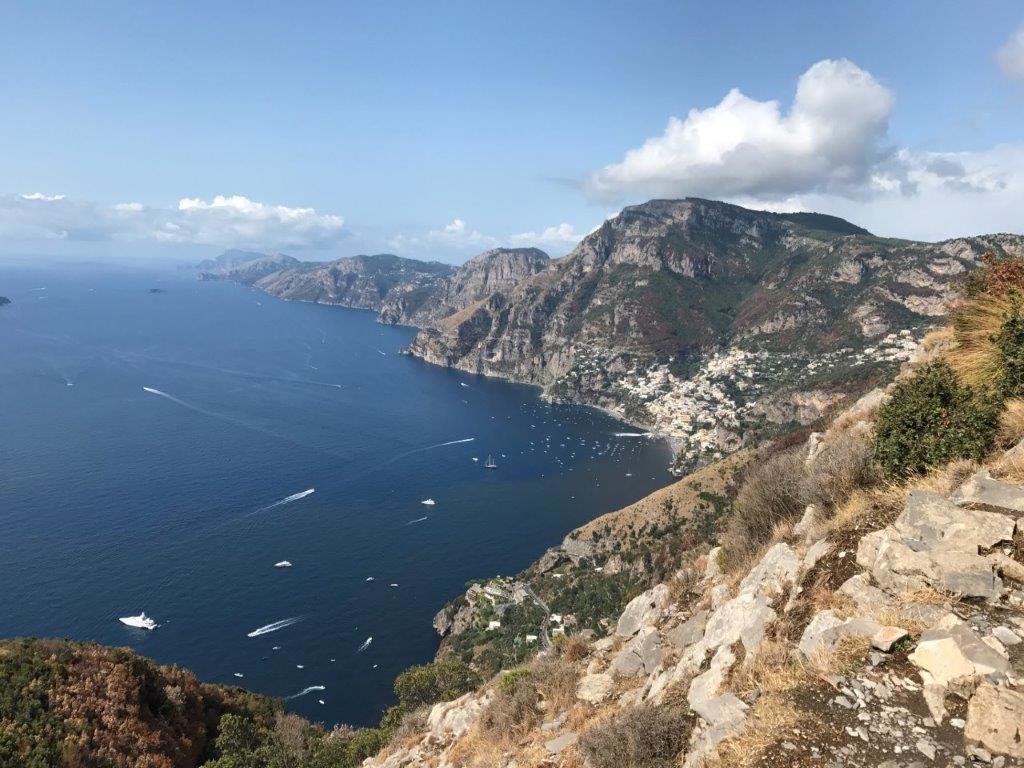 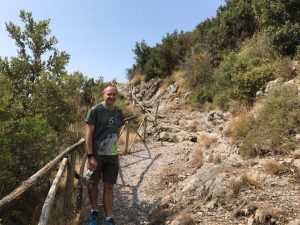 We embarked once again on the Il Sentiero degli Dei – the Path of the Gods – a walk high up from the coast with stunning views from Praiano to Positano and out to the islands such as Capri.  Last time we had a cloudy misty day, so we were happy to be able to enjoy blue skies and sunshine.  The downside was that whilst previously we had the path to ourselves, we had to share it with lots of other people.  That said, it was fun to have a chat and to take photos of a couple that had been trying to take a selfie and risked falling over a cliff! 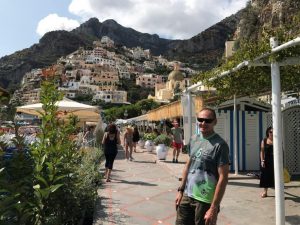 We hadn’t planned on going into Positano – too busy for our liking – but given the walk finished a couple of kms outside the town, we decided to venture in.  And crazy busy it was!  And the place seemed to be full of Aussies and South Africans (as we soon found the entire Amalfi Coast to be – escaping winter??).  We managed to fight the crowds to a restaurant on the waterfront and had a relatively relaxing lunch before catching the bus back to Praiano. 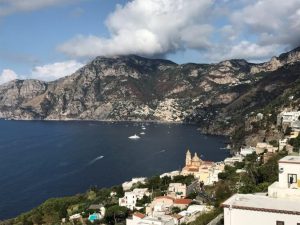 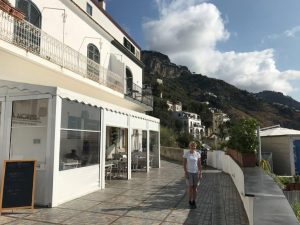 Whilst on the way to the walk, we’d happen to venture past the apartment we had stayed in the last time we were in Praiano.  Just alongside was a new restaurant with stunning views over the sea.  So we decided to reminisce a bit more and enjoyed a relaxing evening meal as the sun set, turning the sky pink. 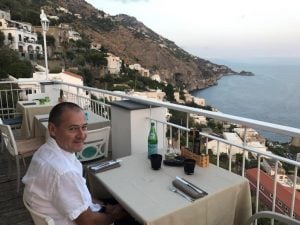 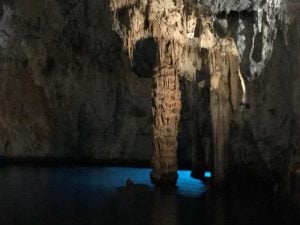 The next day was a Sunday, and this meant that the first bus leaving Praiano for the town of Amalfi was only at 1015.  As we were awake and finished breakfast long before then, we decided to walk the 10km instead.  This was a real treat as we were able to stop along the way to wonder at the view, have a coffee at a little bar overlooking Sofia Loren’s villa (and a spectacular view of the coast too) and visit the Grotta dello Smeraldo – the Emerald Grotto – and still get to Amalfi a few minutes after the bus.  The grotto was certainly a highlight!  After having visited the Blue Grotto on Capri on our last visit – which cost a fortune and we had to line up with hundreds of other tourists – this time we were on a small boat with one other Italian couple.  It’s impossible to describe how the sun shining through a hole in the rock under the ocean can create the emerald colour inside the cave.  Truly magnificent! 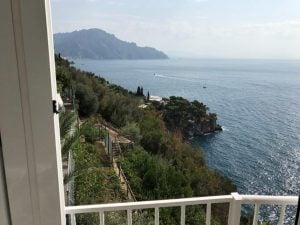 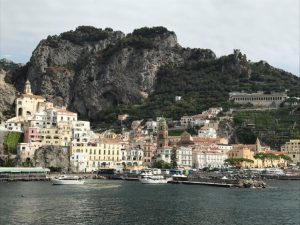 Amalfi was a pleasant surprise when, on arrival, we walked to the “marina” and were almost alone.  A little different when we ventured further into town – with a storm predicted, all boat trips to Positano and Capri had been cancelled, so everyone was walking around the streets.  We still managed to find a bench in a quiet piazza to enjoy our freshly made calzone and best arancini ever! 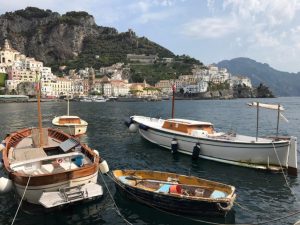 Unfortunately, our idea of getting the boat to Positano and bus back to Praiano was thwarted by the boat cancellations, so we had to get the bus back – we knew from before that this was a harrowing experience, and it did not let us down.  How anyone gets on the correct bus is anyone’s guess.  But amidst the stampeding crowds (really!), as the black clouds started to build, we made it on to our bus for the loooong trip back to Praiano.  Not long in distance, but with the windy road and number of buses (which means lots of stopping to edge past each other), it felt like forever!  It was good to get back, pack and have an early night before our long trip to Orvieto the next day.