Taking a break from Firenze….

Unfortunately Walter was nursing an injury, so was unable to take part in Parkrun this week.  Instead, he was relegated to camera duty.  There was a somewhat bigger field as the organisers had hooked up with the local Virgin Active health club so some of their members and staff took part.

Given we were going to miss the Belle Epoque market, we decided to head there for breakfast on our way home.  This time we cycled all the way there, braving the crowds everywhere, even around the Duomo, and heading up one way streets.  Turning into true Italians!  Hopefully we remember how to obey the rules when we get back to Australia.

Having made use of The Fork restaurant booking engine last year and this, we had earned 2000 yums – loyalty points that would give us 50 Euro off a meal at participating restaurants.  So we tried somewhere new, walking about ½ hour to the other side of the river to Lungarno Bistro (Lungarno means along the Arno).  The service and food were spot on and worth the effort.  We weren’t needing to leave home at the crack of dawn the next day as our flight was only after 5pm, so we only had to go after our 11am church service.

We were about to experience our first flight on one of the renowned low cost airlines – Lauda Motion, part of the Ryanair stable.  The cheap airlines don’t fly from Florence but from Pisa, about 1 ½ train plus tram trip away.  So, after church, we wheeled our suitcase over the cobbles to Santa Maria Novella, Florence’s main station.  The train trip was uneventful as was the flight and the transfer from Vienna airport.  It would be a lie to say “soon” or “in no time”, but without any issues, we were settled into our room at Hotel Beethoven Wien.

Our first meal in Vienna was a few hundred metres up the road from the hotel.  Not sure that salmon or sirloin with mushrooms is a standout meal for Austria, but given it was late enough Sunday night and we were tired and hungry, it worked.  And we both enjoyed our meals.  Walter had been hanging out for his wheat beer!

The following morning, we had our introduction to the typical Viennese coffee house.  We both chose the “melange”, what appears to be the coffee of choice for the locals – a bit like a long black with hot milk or a diluted cappuccino.  We each had a topfenstreudel (cream cheese strudel) which was yummy – a bit like baked cheesecake for breakfast.

During our stay, we decided to taste test all the (stereo)typical Viennese food.  At the Nacht Market, a 1.5km stretch of food stalls near out hotel – we succumbed to a schnitzel.  We opted for pork as it was 6 Euro cheaper than veal, and we probably wouldn’t value it any differently.  We also went to what is supposed to be the best / most popular wurstelstand (sausage stand) for a kaiserkraner – a sausage oozing with cheese.  For those that know how much Glenda hates sausages, you’d understand how good they must be if she even ate it!  You really can taste the cheese.

Our final morning, we chose Café Central – one of the oldest coffee houses in the city –  to enjoy a classic Viennese breakfast of croissant, sammel (bread roll), soft boiled egg and coffee (although we compromised with the latter and had a cappuccino instead of a melange this time).  As we’d read how popular it was and seen the length of the queue the day before, Glenda booked a table for 9am.  This turned out to be unnecessary, but by the time we left, the place was buzzing!

The architecture throughout the city-is truly stunning!  It’s difficult to explain how beautiful the buildings are, with amazing attention to detail on each one.  We noticed that in most instances, each level of the building was decorated differently.  Walter also picked up that the majority of statues seemed to be carrying something on their heads – he was concerned they’d all have headaches. 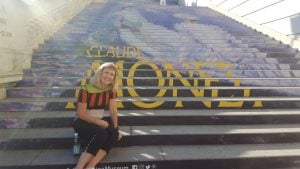 When one thinks of Vienna, music and opera often comes to mind.  In addition to musicians, famous literary figures are associated with the historic city.  Our hotel, Beethoven, had each of its floors decorated according to a different theme – we slept with the literary figures, whilst others were with musicians and yet others were in the boxes at the opera.  I’m not too sure how to describe the level with the black walls and red mood lighting! 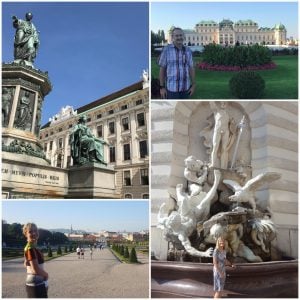 We were fortunate to time our visit over one of the nights that Gisella, the ballet, was on at Wiener Staatsoper (Vienna Opera House).  Being a “retired” dancer, Glenda was in her element, despite having seen Giselle on a number of occasions before.  Even not being a ballet lover, one could not help but marvel at the stunning building and be blown away by the experience.  Truly a night to remember!

One of the interesting museums we visited was the clock museum.  They had a collection of seven hundred clocks from around the globe in an enchanting Old Viennese building.  Spread over three floors, the exhibition tells a story of scientific advances and technological precision, but also of social transformation and design trends in the decorative arts. Playful picture clocks with hidden dials, fascinating astronomical clocks, watches, luxurious pendant jewelry and so much more.  Walter was especially fascinated by the picture clocks.

The horses at the Spanish Riding School are trained using traditional methods that date back hundreds of years, based on the principles of classical dressage.  The stallions are world-renowned for their impressive performances.  Something that is possibly less well-known is that Lipizzans are actually gray horses, with black skin and dark eyes.  They are born dark—usually bay or black—and become lighter each year, taking 6-10 years to develop a white coat.  Some of the stallions never change colour – it is a long-standing tradition to have at least one bay Lipizzan stallion in residence at the Spanish Riding School and he is considered to be the luck charm.

Each morning, a two hour training session on the famous arena is open to the public.  During this time, the stallions and their respective riders, associates, apprentices and newbies take their mounts through a number of moves to music to prepare them for the performances.  There’s a serious pecking order for the riders – the selection process in stringent, with anyone under 172cm not even making it past the first round.  And don’t dare put on weight unless you’re the lead rider!  The stallions we saw ranged in colour (and age) from the symbolic single black horse, through shades of gray, to those that had developed the legendary white coat.

The riders, too, are carefully schooled. They first work without stirrups and reins on well-trained horses for up to 3 years, to teach a balance. They are then allowed to control the animals themselves, under the eye of an experienced rider, until they can perform the high school movements. With intensive training, this will take 2–4 years. The rider is then allowed to train a young stallion from unbroken up to High School, a process that usually takes 4–6 additional years.  So from joining to becoming a fully fledged rider (if you make it) can take from about 8-13 years.

What we didn’t enjoy, and in all honesty came as quite a shock, was the extent of the smoking in Vienna.  Everywhere we went, we felt as though we couldn’t get away from the smell.  We’d always thought Italy was bad, but this was far worse.  Then on our final day, whilst standing at the wurstelstand, we heard a local talking to some tourists.  We discovered that as recently as May this year, a total smoking ban was supposed to come into operation.  However, this was revoked, meaning restaurant, café and bar owners can choose to be a smoking venue.

On digging a little deeper we found out more.  The move was spearheaded by the leader of the Freedom Party, Austria’s Vice Chancellor Heinz-Christian Strache, himself a smoker, who told parliament that it was about freedom of choice.  The move has horrified Austria’s medical establishment.  One of the leading doctors was quoted as saying – “The decision is irresponsible. It was a victory for the tobacco industry. The new government made Austria into the ashtray of Europe.”

It was strange to us that what appeared in so many ways to be a very progressive city, was so behind in this major issue affecting national health.