Having traveled on the ferry on the inside passage from Port Hardy to Prince Rupert we decided to spend a couple of nights in Prince Rupert before continuing our trip east to Jasper which is in the Canadian Rockies.

Glenda did a great job booking us a nice hotel room with a view of the inside passage.  Good thing – on the first night Glenda got ill (bug from the ship?) resulting in us spending a bit of time in the room.  This was not before we had at least been able to get out for a long run around town earlier in the afternoon.

We did go out for dinner at a nice seafood place in Cow Bay which part of Prince Rupert.

The second night, with some medicated help, Glenda was up to going out for a nice dinner at the hotel restaurant.  We had a great table and enjoyed the evening.

The shower in the bathroom was….complicated.   Required a pilots licence to operate.

Prince Rupert reminded us of the typical Alaskan town we have seen in movies.  We really liked the town.  Prince Rupert’s claim to fame is that it is where one Charlie Hays tried to build a cross Canada railway line in the early 1900’s to rival the Trans Canada.  Unfortunately he died on the Titanic returning from fund raising in England resulting in the project not being completed.  The Grand Trunk railway runs from Prince Rupert to Jasper.

Leaving Prince Rupert for Smithers we came across a relay race along the river to Terrace – a distance of 142km.  This meant we had to drive slowly at many points with runners along the road.  No big deal – going slowly gave us the chance to admire the scenery which must rank in the top drives in the world.  The river surrounded by snow-capped mountains for more than 100km was truly magnificent.

We had booked a cabin in Smithers for a couple of nights.

It proved to be a great choice.  With lousy weather (raining) and Glenda not well, we could spend our days relaxing in the cabin.  The view of Hudson Bay Mountain (2331m) was spectacular.  The cabin was probably one of the best set-up self-catering places we have stayed.  We had all the crockery and cutlery required to prepare feasts.

From Smithers we travelled to Prince George to stay at a B&B.  The B&B stay was great.  We had an entire floor in a house with our own room and sitting room.  The breakfast was oh so good – good thing we don’t have too many of them – my waistline would greatly increase.

Entering PG – we came across the PG man – a local icon.  Built in 1983, this Mr PG. replaces an earlier Mr PG built in 1960 as a salute to the lumber industry.  Mr PG’s arm and body are made of simulated logs, with a round, cartoon head and another log as a Pinocchio-esque nose.

Whilst in Prince George we were able to complete a short 6km bush walk that started near the B&B.  It was good to get a walk in after days of very little activity.  Glenda was still not well and we had to take it easy.

And finally…we were on the last stretch to one of our main destinations – the Canadian Rockies.  We decided to spend 6 nights in Jasper as our first stop.

On the way to Jasper we stopped at an ancient rainforest 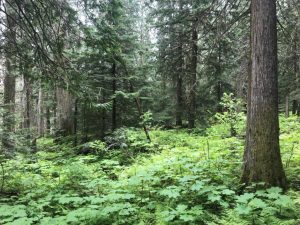 – it is supposedly the rainforest furthest from any coastline (800km).  It was interesting, but having seen a number of rainforests on this trip…

We also stopped at the Raush River where we enjoyed seeing the rapids.  The power of water.

Just before Jasper we stopped at Mt Robson – the highest peak in the Canadian Rockies.  We fortunately had reasonable weather and had a great view of the mountain.

In Jasper we have again elected to stay in a cabin along the Athabasca river.  We have a great waterfront cabin with a great view of the mountains – including Mt Robson.  I think we will enjoy our time here.