Our friend Tracey is visiting us from Sydney for a week.  As she was arriving in Milan, we decided to take a few days away from the slow pace in Liguria to hit the bright lights of Turin and Milan before collecting her from the airport.

To make the most of our trip, we woke up early and chose to stop off along the way for breakfast.  We took one of the windy roads across the mountains rather than the autostrada – about 40km shorter in distance but 2 minutes longer in time – and were glad to have done so.  It was really pretty and there were some lovely villages along the way.

Our arrival in Turin during peak hour was a bit hairy!  After making a wrong turn and going around the block, we managed to get to the right place.  And navigating tram tracks and avoiding the ZTL (zone in most Italian cities where you can’t drive without explicit permission), we spotted the little entrance down to the parking garage.  Whew, now we could relax!

Walter had certainly earned his hot chocolate!  We had read about an old café in the piazza near the parking that sold cups of thick (and I mean thick), dark chocolate.  After finding said café amongst the numerous shops / cafes under the HUGE porticoes above the parking area, we entered….and both of us felt a bit underwhelmed.  Not quite what we expected.  But after spotting the drinks “menu” on the wall and ordering our “poison” we were treated to the yummiest cup of velvety liquid ever! 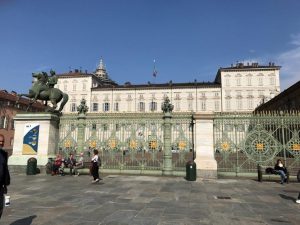 Our next stop was the Museo Nazionale del Cinema – as the name implies, a museum dedicated to all things related to movies –  the history of lighting / cameras, the making of movies, the stars, the props and promotional artefacts.  They even had Skippy! 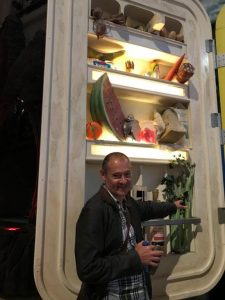 The building in which the museum is housed is a significant building in itself.  An architectural landmark of the city of Turin, it was initially conceived as a synagogue, before being bought by the Municipality of Turin and made into a monument to national unity. Planned and begun by architect Alessandro Antonelli in 1863, it was only completed in 1889. With a height of 167.5 metres, it was the tallest brick building in Europe at the time. The panoramic lift was inaugurated in 1961, during the celebrations for the centenary of the Italian Unification and it was renovated in 1999. Today it still allows visitors to go up to the panoramic terrace which is 85 metres high and take in the amazing views of the city and the surrounding Alps. 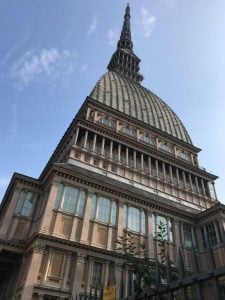 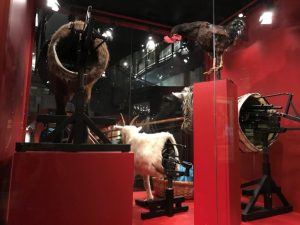 The visit to the museum built up our appetite so we were ready for a lunchtime panini.  After sitting outside a little café across the road from the museum for 10 minutes waiting to order, we decided to move on.  And we were glad we had!!  We strolled around the corner and discovered a place where all the university students go – and were rewarded with an awesome sandwich for 5 Euro (we could’ve had just prosciutto and cheese for 2.50). 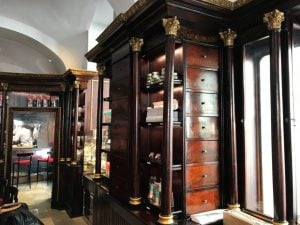 Rather than go to the Egyptian Museum, the other key site in Turin, we chose to walk around and absorb the atmosphere.  The architecture is amazing, with lots of very big piazzas and streets lined with loggia (porticoes).  We stopped off at a café, once an old pharmacy for a macchiato (and toilet break) – it was beautiful, filled with old wooden cabinets that used to house the medicine.

After a bit more wandering around the backstreets where children were playing after school, it was time to head back to the car and head to Rho, a suburb outside Milan where we were staying for the next two nights.

Our arrival into Milan was uneventful as was the check-in to our hotel.  That’s said, we were treated to an upgrade, which was welcome surprise.  We were also given a voucher for a free drink on the rooftop terrace – so enjoyed a glass of wine as we watched the sun go down before heading out to dinner.  We had chosen to stay in a suburb on the outskirts of Milan with free parking and easy access to the train station – so we could head into the city the following day.

Dinner turned out to be one of those memorable moments.  We discovered a gem that was obviously a neighbourhood favourite – and enjoyed one of the best meals we’ve had in Italy.  Given the amazing food here, that’s saying something!  And at a reasonable price we hadn’t expected in Milan. 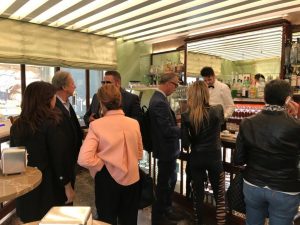 After navigating the train system to venture into the city the next day, we found ourselves in the “golden triangle”.  The streets that house all the fashion labels such as Gucci and Prada.  Good thing we had worn our nice leather jackets!  The café we dropped into was so different to anything we’d been to elsewhere – full of fashionistas and businessmen.  It was amazing to see how one can do a business deal in 5 minutes standing up for an espresso.  There were very few people sitting in the more expensive seating area up the back. 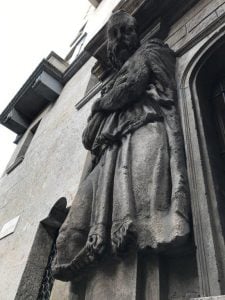 As we entered the historical centre, it was difficult not to say “wow” at every turn.  The buildings, statues, gargoyles were astounding.  Having read a number of novels about opera performers at La Scala – Milan’s famous opera theatre – we were keen to visit.  The ticket includes a visit to the opera museum but of more interest was the opportunity to go into the boxes on the third floor of the theatre.  The guy in the ticket booth advised as to come back from 12-1pm so that we could see it when the current rehearsal was complete and the lights would be on. 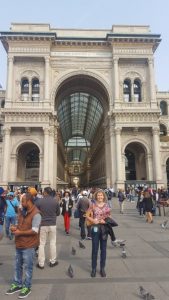 This proved ideal, as it gave us time to walk through the beautiful (really gorgeous!) Galleria Vittorio Emanuele II through to the Duomo (Milan Cathedral), which is also a spectacular piece of architecture.  There was a lot of security around as there was a big media event taking place.  In addition, we visited the food hall of one of the major departments stores – the chocolate shoes we saw there were probably the only affordable shoes in Milan (although not having looked at the prices, this may not even be the case). 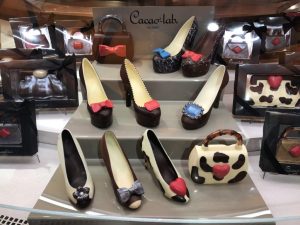 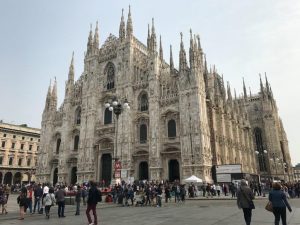 We timed our visit back to the theatre perfectly!  The rehearsal was wrapping up, so we were able to see some of the performance….and as soon as they stopped, the lights went on inside, they removed the glass shield from the front of the box and we could see the grandeur of the building.  The most remarkable part of the theatre is the way in which they have embraced the most advance technologies for managing sets etc. whilst keeping the historical feel of the building, both inside and out. 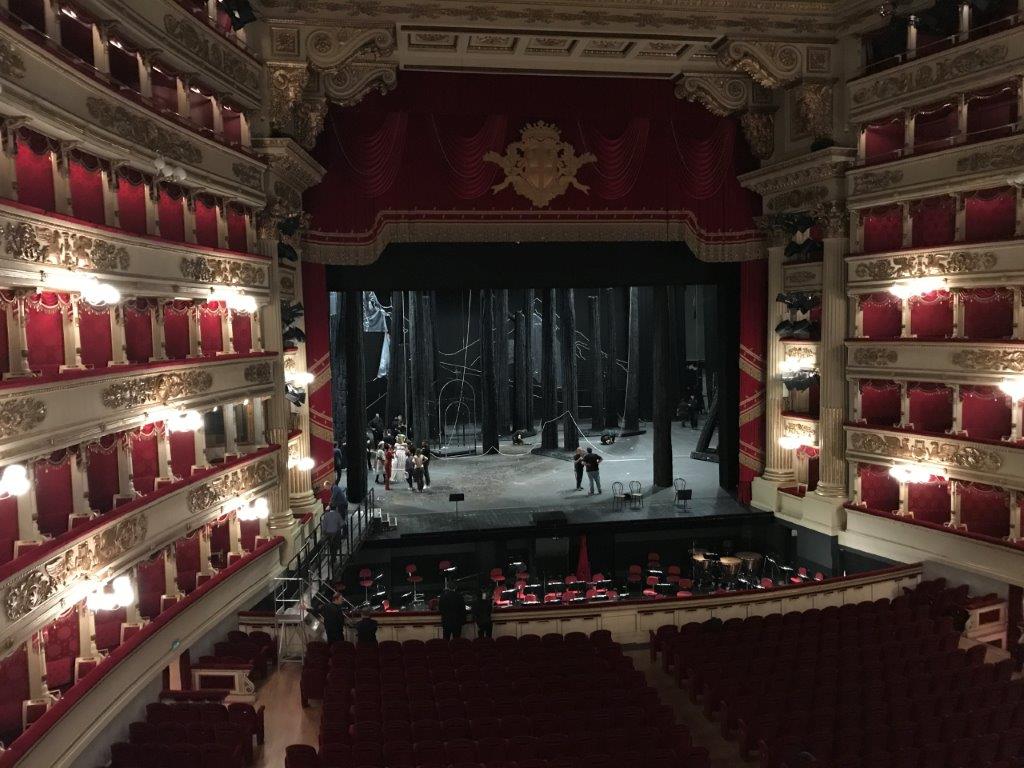 We’d booked lunch in a quieter part of town and this proved to be another good choice.  Not only did it provide is with a chance to venture into another part of the city, but the service, food and prices were fabulous! 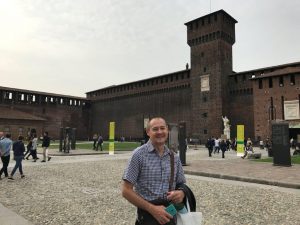 Wanting to visit the Sforza Castle, we took a walk to that part of the city – and not only did we get to see the magnificent castle with its enormous central courtyard, but we happened across a food event.  This was the biggest display imaginable, with people and food everywhere – simply gobsmacking! 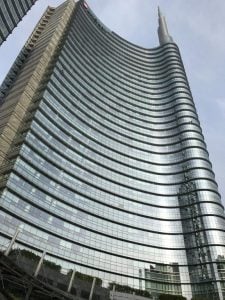 Our final stop before heading to the train station – and following a long walk through some of the bohemian part of town, was the Unicredit tower, Milan’s tallest building.  Magnificent in a very different way to the old buildings we had looked at the rest of the day.

On arriving back at the hotel, we visited the supermarket downstairs for some supplies and ate in our room – fresh bread, cheese and prosciutto. 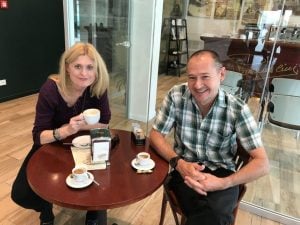 The next morning was a trip to the airport after breakfast to collect Tracey and a drive on the autostrada to get home.  We stopped at the local coffee shop to give Tracey her first Italian cappuccino since she lived in Italy many years ago!